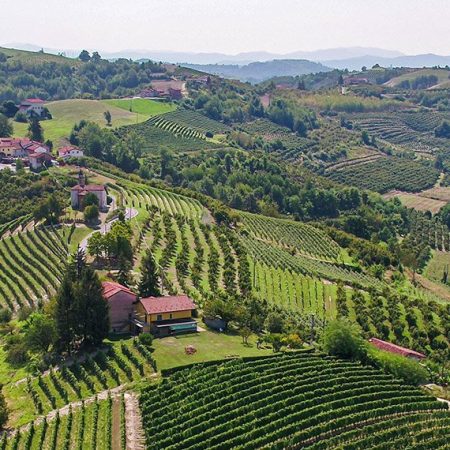 Our family for 5 generations has lived on the hill of Moncucco in the municipality of Farigliano.

In all likelihood my great-great-grandfather moved from the hills of Dogliani in favor of a more distant but cooler hill. Moncucco is a small village (now uninhabited) located at the base of the hill, at an altitude of 500 mt. Higher up, at 570 mt., is the chapel dedicated to St. Bernard, near the hamlet of Botti, where we have lived since 1965 and where our company is headquartered.

Grandfather Angelo was born in 1906. When I was a child he used to tell me fantastic anecdotes about his life. One of them-which helped create the pride that made me later return to this land-told of when he was a boy yet to be married, in the late 1920s. A high hill that was difficult to reach because of the road going up through the woods, and a market where wine was sold.

When throughout the whole year I would go down to the neighboring villages to go to a party or a dance, in an attempt to look for a girlfriend I was careful not to reveal where I was from: the hill of Moncucco was known as a rather remote and inconvenient place, the road was bristly and muddy, full of potholes, and it took at least an hour to go to the market. The girls would have been scared to follow me up that hill. But there was a time when declaring where I came from had great advantages. In the spring, when the new wine was ready, I would go down to the market in Dogliani. There all the farmers would converge with the small flask (the Atast) in their pockets full of their wine that they wanted to sell to the best buyer. The farmers would all be lined up and the “shopkeeper” would go through the vendors, first asking where they came from. There, on that occasion I would notice that people I didn’t even know claimed to be coming from the Moncucco hill.